Posted on February 12, 2014 by FancyNaturals
By Tamasin Ford

Mining companies are moving in after conflict left vast natural resources untapped, but will these benefit ordinary Ivorians? 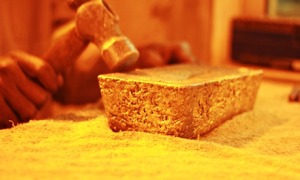 Tongon gold mine in northern Ivory Coast, 34 miles from the Malian border. The country is seen as the new frontier for gold. Photograph: Tamasin Ford

From the sky, Ivory Coast looks like a patchwork quilt, with fields of varying shapes and shades of green and brown woven together. In the 60s and 70s, the country’s economy was built on agriculture and it became the world’s biggest producer of cocoa, as well as Africa’s leading exporter of rubber and cashew nuts.  When peace finally arrived in 2011, after more than a decade of conflict, President Alassane Ouattara’s new government pledged to unlock the economy, not only by increasing trade with the non-francophone world, but by expanding it to sectors other than agriculture.

“We are really open to all the world,” the prime minister, Daniel Kablan Duncan, said last month at the start of the country’s first investment forum since the 2009 coup that split Ivory Coast into a rebel-controlled north and a government-controlled south. “We are now normal … and we want the rest of the world here,” he said.

Ivory Coast’s historical reliance on agriculture has meant that it holds untapped potential for mining companies, with sources of manganese, iron ore, nickel, bauxite and, crucially, gold.  The country lies along the Brimian Greenstone Belt, a 2bn-year-old rock formation stretching from Senegal to Ghana, with some of the richest gold deposits in the world. It is thought that there is more gold under Ivorian soil than in neighbouring Ghana, currently Africa’s leading producer of the precious metal after South Africa.

“There is a future for gold mining,” said the newly appointed minister of industry and mines, Jean-Claude Brou, adding that the prospects looked “very, very good”. Brou took up the post in November as the new ministry was formed, in a sign of the government’s ambition to expand the industry.  In the far north, 34 miles from the Malian border, a Tongon gold mine punctures the flat, arid landscape. Mountains of excavated rubble create a border around the site, which covers more than a square kilometre of land and is the largest mine in the country.  “It looks like any old rock but in this rock there can be gold,” says senior mine planning engineer Masauso Mumba, explaining that the smallest gold particles are almost impossible to see with the naked eye.

South African miner Randgold Resources has an 89% interest in the Ivorian company, Société des Mines de Tongon, which owns Tongon mine. They began operations in 2010 as fighting erupted after the presidential elections. Since then, they have secured 12 exploration permits, with three more waiting to be signed off; that means almost half a billion dollars of investment so far.  According to Mark Bristow, Randgold’s chief executive, Ivory Coast is the new frontier for gold. “I think it can very easily overtake Ghana without much effort,” he says. “It has a lot more to offer,” he added referring to low-cost power, good infrastructure and electricity grid network.

“President Ouattara has a head start because this country used to be the powerhouse of west Africa,” Bristow says. Ivory Coast has the largest economy of the eight countries that comprise the West African Economic and Monetary Union (UEMOA) and last year it recorded one of the highest economic growth rates on the continent. But after more than 10 years of political instability, are investors confident that peace is here to stay? “No, I’m not,” Bristow admits. “But we believe in it prospectively.”  Asked the same question, Brou pointed to the Ivorian footballer Didier Drogba, who last year bought a 5% stake in the Ity gold mine in the west of the country. “It gives an answer to the confidence question. Didier believes in the future of this country,” he says.  The mines minister referred to last month’s inauguration of the fourth gold mine by Endeavour Mining, adding that a fifth is expected to open this year, pushing the government closer to its target of tripling gold production within the next five years.  “It all tells you there are not only opportunities there but that investors have strong confidence in the country and its future and potential,” Brou says. He has been working on updating the mining investment code, a legal framework to put Ivory Coast in line with world regulations, which is waiting in parliament for final approval. “We are taking all the steps so that the mining sector becomes a very attractive sector,” he says.

But digging for gold is not a quick fix for the economy. While the operations of Randgold Resources and Endeavour Mining combined have provided more than 2,000 jobs, Ivory Coast’s gold-mining sector has a long way to go before it matches Ghana’s, which employs nearly 30,000 people. There may be more gold under Ivorian soil, but it can take up to 15 years from discovery to production, which means it will be a long time before Ivorians begin to truly benefit from their wealth of natural resources.