The Barbershops of West Africa

Posted on February 18, 2014 by FancyNaturals

Nigerian photographer Andrew Esiebo has explored barbers and their shops across seven west African countries, capturing the spaces in which they operate, the aesthetics of their premises and the style of their customers.

His photos have been featured in the New York Times, and 10 of his prints have been added to the permanent collection of the Musée du quai Branly in Paris.

How did the barbershop project come about? The idea for Pride came about during a street photography project I was doing in Lagos. While photographing people on the street, I stumbled upon a barbershop and started talking to the owner. He said to me that while he might not be considered an important person in the society, he was proud to be the barber to one of Nigeria’s ex-presidents. That resonated with me and made me think about the role, and importance, of barbers in west African society. I thought about the idea for several years and in 2012, following an artistic award I received, I was able to develop the project. I traveled to several west African cities and looked at the relevance, and the role, of the barbershop in the city. 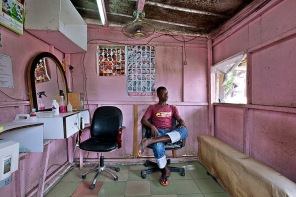 What can you tell us about the role that the barber plays in west Africa? Barbers help people to gain an identity. Some people have to have the right cut to project who they are. The way they look, through their hairstyle, influences the way they feel about themselves, the way people see them and address them.

Barbers are also influential because their shops are what I call “public intimate spaces”. People share their problems in conversation with the barber. The barbers learn a lot from this, and this knowledge is then shared with other customers.

So, barbershops are not only a place for cutting your hair but a space where people meet, where they come to relax and discuss issues; a space where relationships are built, business deals are sealed and where intimate subjects are often discussed.

Which barbershops were most interesting to you? Those which displayed icons, religious images, pictures of hip-hop artists, posters of soccer teams and icons of global black culture. There was a shop in Mali where the guy had posters of [Osama] Bin Laden and [Muammar] Gaddafi next to pictures of President Obama. I found this contrasting use of icons interesting. The barber said that, on the one hand, Bin Laden and Gaddafi were his heroes while on the other hand Obama is a global symbol of black power. For a black African to be the president of the US is something to be proud of, he said. So he named his shop Barack Obama Coiffure. There were many others I found interesting too. 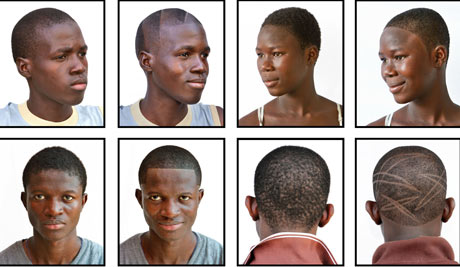 Before and after customer pictures. Photograph: Andrew Esiebo

There was one particularly eclectic one from Senegal, worn by a barber.  I asked

the guy why he barbered that style for himself. He told me: “You know, this is a very conservative society but through my hair, I have the freedom to express what I want”.  I really fancied that. He was rebelling against the conservative nature of the society.

Are you exhibiting Pride at the moment?  No, but I hope to exhibit this project across west Africa and beyond. I am still looking for an organisation to support the exhibition. I would also like to publish a book on the project because I think this is an important part of our culture that needs to be documented. It has to be celebrated and shown around the world.

What is your next project?  I will be looking at the nightlife of Lagos and beyond through the eyes and lives of DJs. DJs at parties, DJs in concerts, DJs at various ceremonies. I want to use DJs, who are an integral part of our nightlife, to depict life in Lagos.

Any advice for aspiring photographers?  I think the only advice I can give is for them to work hard, to be passionate about what they do, to never give up and always be ready to learn new things. Keep pushing and open your horizons. You’ll go places with that.

The Barbershops of West Africa – in pictures