Why is their such a huge disconnect between American Blacks and Africans?

We’re not Americans, we’re Africans who happen to be in America. We were kidnapped and brought here against our will from Africa. We didn’t land on Plymouth Rock – that rock landed on us.” ~ Malcolm X

I am not one to disagree with Malcolm X, however, I can count all my fingers and toes on how many people do. Common knowledge is not so common for everyone, so in the past when I hear American blacks and sometimes Caribbean’s claim that there ancestry does not derive from Africa; I must say I am very troubled and confused by that declaration. My first question is, where do you think you come from? I had one friend say to me, “I just don’t think all black people come from Africa.” Little does she know, science proves that all human ancestry derive from Africa (i.e. Mitochondrial Eve), but I digress.

As a product of both Ghanaian parents and raised in America, I knew early on that people viewed Africa as primitive and barbaric. Images are powerful, so it was no surprise that blacks in America did not want to be associated with Africa or the culture. However, facts are facts. As a kid growing up in a predominantly white setting, I tried so hard to disconnect myself from my African roots. Although hard, because my features are prominent, I always used my American name “Amy”, to prove to my counterparts that I ‘m really American. It wasn’t until my last year in high school that I embraced my culture and what it represents. 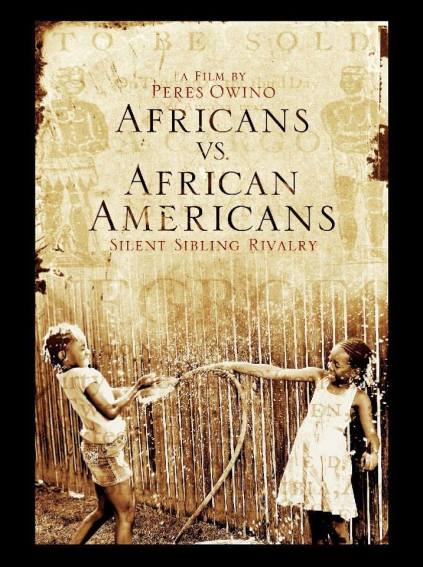 Last year, I had a spirited debate (that’s a nice way to put it) with my black American friend. She was born and raised in Massachusetts. I was talking to her about a forum I attended about black women and their hair. I told her how the speaker greeted the audience by saying, “good evening my beautiful African people.” Some of the audience members sunk their teeth and was like “hhmm hhmm”. The speaker was confused and said, “Oh, some of us don’t like to be called Africans.” Side note: At this forum were people who are usually (I’m assuming) socially conscious. Anyway, I relay this to my friend as a way of sharing my frustration that people (black people at that) feel this way. Immediately after I said that she replies, “I agree with the audience, not everyone who is black is from Africa…their ancestors can be from somewhere else.” That blew my mind. This is a woman who is educated and is in graduate school. This woman is of darker hue, and many times mistaken for being from Africa. So we debated, and it grew very “spirited”.

The highlights of the conversation was not so much that blacks are from Africa, but more in the lines of; because Africans migrated to America in the late 60’s and 70’s, they haven’t endured what black Americans have in this country such as, slavery, Jim Crow, racism, and oppression for many generations. I noticed the anguish was more geared towards Africans advancing economically quicker than their black American counterparts. She also indicates that my African mother and father did not witness or experience racism and oppression for many generations. She must not realize that my mother and father’s experience in a 3rd world country is pretty oppressive and not the best circumstances to live in, that is why they both immigrated to America. Also, when any black woman or man migrates to America they still encounter racism, oppression, and discrimination regardless if they appear African or black American.

Africa has a rich history of successful emperors and democracies. Blacks in America have made many strides collectively under extreme challenges and systematic domination. I hope as a group we can understand both histories because they are interrelated. United we can go very far, as displayed in other communities. My desire is that we can break down the stereotypes and myths and really bridge the gap. As Malcolm X brilliantly stated, “ There can be no black-white unity until there is first some black unity…. We cannot think of uniting with others, until after we have first united among ourselves. We cannot think of being acceptable to others until we have first proven acceptable to ourselves.”