Half of a Yellow Sun, here I come 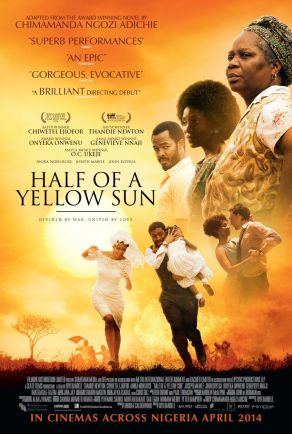 I should start off by stating that: Half of a Yellow Sun, a novel by Chimamanda Ngozi Adichie is a great read. I have owned this book for a while now, since 2009 to be exact. I purchased it after a friend who had read Purple Hibiscus by the same author wouldn’t stop raving about it, which I also own.  They both sat on my bookshelf as I failed to see any urgency in reading either of them, as my laundry list of books to read continually expanded. However that urgency had become more pressing when I heard that, it was to be released into a movie.

Now! call me a purist if you’d like as I firmly adhere to the idea that a movie adaption of any novel is never quite as representative of said work. Just as I insisted on reading Life of Pi, prior to seeing the movie – which unfortunately was no longer in theaters when I was done –  a pity actually, the cinematography was breathtaking and am sure doubly so on a big screen. I decide to do the same with this book however I was determined not to miss the theatrical release this time.

So with the release approaching, I made Half of a Yellow Sun my traveling companion on my trip to Africa. “I am such a cliche”, I thought to myself at first, reading African books on a trip to Africa. Since at the time, I was on the last chapters of Ellen Johnson Sirleaf ‘s biography: This Child Will Be Great: Memoir of a Remarkable Life by Africa’s First Woman President. I was so close to the end that I had to finish it before starting Half of a Yellow Sun. So I took them both.

It was all and more that I had anticipated. Without being too much of a spoiler, I will say that this book encompasses all of the beauty and the complexities of the African condition. Which is essentially that never ending tug of war between nestling oneself into the comforts of our traditionalist culture yet being repeatedly made to address the sometimes difficult inclusion of modernity, colonialism, love, patriotism and class disparity. The book had it all and I couldn’t put it down, I had it with me at all times.

So finally I am now back in the states and I plan on seeing it. It is currently playing at the Film Society of Lincoln Center, in New York City during the African Film Festival starting on Wednesday May 7-13th along with other great films.

Wednesday, May 7 -13 at The Film Society of Lincoln Center (FSLC) in New York City – See more at: http://www.sierraexpressmedia.com/archives/67203#sthash.77KxbGNZ.dp

Wednesday, May 7 -13 at The Film Society of Lincoln Center (FSLC) in New York City

2) Make the description personal, clearly explain why anyone interested in this type of book needs to read it.

3) Create an emotional connection by describing how the book will make the potential reader feel after reading it or after putting to use the tips it provides.

4) Detail what the reader will get out of the book – what’s in it for the potential reader? If he or she is unhappy, will it make him or her happier than ever before? If so, why? Because the tips are practicable, doable and instantly useable? What else? List the benefits.

5) How? For example, everyone wants to be happy, so how does “Happy Every Day” achieve that goal?