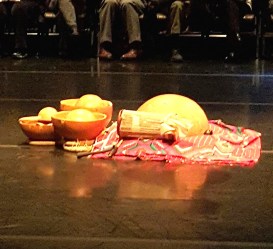 A few months ago, a couple of girlfriends and I attended the world premiere of Yimbégré, a wonderful performance conceived by talented African choreographer Souleymane ‘Solo’ Badolo, at BAM (Brooklyn Academy of Music).

The show opened on a pitch black stage in absolute silence for what seemed like an eternity, which was then broken by melodic chants of a man perched and drumming on a calabash. He was later joined by two other performers (Souleymane Badolo & Sylvestre Koffitse) They slowly converged in this swaying and chanting cadence until reaching center stage…and then silence!

The entire three-man show was filled with many similar moments. Each twist, leap, and brush between performers was at times fluid and at others deliberately clumsy.  Regardless, it was clear how attuned they were to one another.

After the show, my friends and I had a discussion about our individual perceptions of this wonderful performance. Interestingly, we had different take aways and themes ranging from brotherhood or friendship to love lost between two men–if the latter! I would say it is quite a progressive undertaking for African performers, who have long contended with censorship over some subject matters that are considered “controversial”.

The show was performed primarily in Dyula  and some French was peppered in toward the end (some of which I thankfully managed to understand as both are spoken in Ivory Coast).  We were all pleasantly shocked at the finale, when all three performers dowsed each other with water-filled calabashes and stood center stage once more in silence, as it was at the beginning.  Overall, it was simply a delightful performance by a conceptual visionary (Souleymane Badolo) and we thoroughly enjoyed it.

About the creator of Yimbégré, Souleymane ‘Solo’ Badolo. He was born in Ouagadougou, Burkina Faso. He started his professional career as a dancer for the DAMA, a traditional African dance company, and in 1993, he founded his own Burkina Faso-based troupe, Kongo Ba Téria, fusing traditional African and western contemporary dance aesthetics. Solo has danced with world renowned choreographers and performed with the National Ballet of Burkina, choreographed for a number of companies, and developed a program at The Center of Dance, Music and Theatre in Rome. (newyorklivearts.org)